This page explains the well-being proxies (four colored lines) that were used to construct the overall trends in population well-being (thick grey line). The data on which these curves are based can be found here.

RelWage (short for relative wages) is the wage scaled by GDP per capita. This quantity is similar to the ‘labor share of income,’ used in economics, which measures the proportion of total economic production that is paid out as wages. However, while economists are interested in how the fruits of economic growth are divided between labor and capital, our primary interest is in how it is divided between commoners (crudely, the 99 percent) and elites. The problem with the labor share of income is that it includes multi-million dollar salaries paid out to CEOs, corporate lawyers, and other high-earning individuals who are definitely members of the elite. Even though there are few such individuals, they earn hundreds, or even  thousands, times as much as a typical (median) wage earner. Thus, to obtain a measure that is more relevant to the share of economic growth going to commoners, we need to scale the median wage by GDP per capita (instead of scaling the mean wage, which is what labor share effectively does). Because data on median wages are available only for the more recent decades, I use data on production workers compensation (Officer and Williamson 2013).

Health is proxied by a combination of two indicators of biological well-being: the expectation of life and the average population stature (adult height) of native-born Americans. See Robert Fogel, The Escape from Hunger and Premature Death: 1700–2000.

Family is an index of social well-being. It’s proxied by an inverted age of first marriage. Generally speaking, when young adults feel optimistic about their future economic prospects they tend to get married early. If, on the other hand, they are unsure that they will have a well-paying job next year, they tend to delay marriage until they work up to a more secure position, or save some money. Of course age of first marriage is affected by other social trends, in addition to social optimism. For example, today people who are completely secure in their economic prospects tend to marry later than people in similar position who lived two centuries ago. For a variety of reasons, as societies modernized, people tend to marry later. The way to deal with this complication is to subtract a linear trend from the data.

Here’s what the actual data for the average age of first marriage of American women looks like: 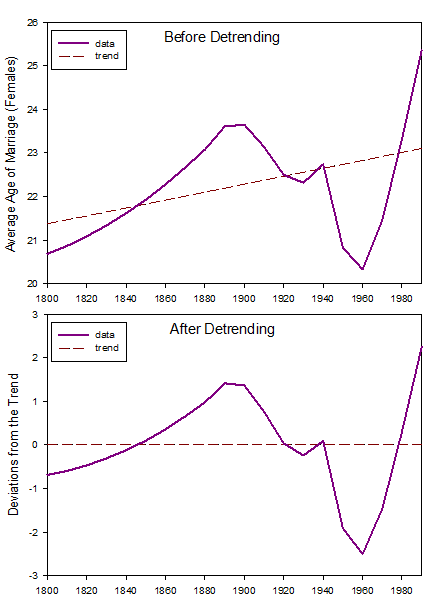 The top half shows that the basic pattern is one of up, down, and again up around a rising mean. In the bottom half I subtracted the trend, so now the numbers are fluctuating around the zero line.